For the purpose of determining tuition, applicants are classified as in-state (Alabama) or out-of-state (non-Alabama) students. The University of Montevallo’s Residency Guidelines are based on Alabama Code 16-64 regarding residency practices for tuition purposes at all public institutions of higher education within the state. Any student attending the University of Montevallo that lives in Alabama for the primary purpose of obtaining an education will be considered a “non-resident student” for tuition purposes. Initial determination of a student’s residency classification is made by the Admissions Office for undergraduate students, and by Graduate Programs for graduate students. A student’s residency classification will remain unchanged throughout their education at the University of Montevallo unless compelling and satisfactory evidence is provided indicating that the student’s reason(s) for coming to and remaining in the state has changed.

According to Alabama Code, Section 16, Chapter 64, A “resident student” is one who meets all of the following criteria:

(2) RESIDENCE. The single location at which a person resides with the intent of remaining in that location indefinitely as evidenced by more substantial connections with that place than with any other place.

(3) RESIDENT. One whose residence is in the State of Alabama.

(4) RESIDENT/NONRESIDENT STUDENT. In determining resident or nonresident classification, the primary issue is one of intent. If a person is in Alabama primarily for the purpose of obtaining an education, that person shall be considered a nonresident student.

Section 16-64-2 Requirements for qualification as resident student; rules and guidelines.
(a) For purposes of admission and tuition, a public institution of higher education may consider that the term resident student includes any of the following:

(1) One who, at the time of registration, is not a minor and satisfies one of the following:

(2) One who, at the time of registration, is a minor and whose supporting person satisfies one of the following:

(b) For purposes of admission and tuition, a public institution of higher education shall consider that the term resident student includes any of the following:

(1) One who, at the time of registration, is not a minor and satisfies one of the following:

a. Is a member or the spouse of a member of the United States military on full-time active duty stationed in Alabama under orders other than attending school.
b.Commencing on May 22, 2012, has been a member of the Alabama National Guard for a period of at least two years immediately preceding the student qualifying for resident tuition and continues to be a member of the Alabama National Guard while enrolled at the public institution of higher education.
c. Is a veteran of the Armed Forces of the United States, provided that the veteran has become a resident of Alabama and satisfies at least one of the following conditions:

1. The veteran has served on active duty for a continuous period of time, not less than two years, and has received an honorable discharge as verified by a United States Department of Defense Form 214 within five years of enrolling in an Alabama public institution of higher education.
2. The veteran is currently serving in a reserve component of the Armed Forces of the United States, as verified by a memorandum from the commanding officer of the veteran student.
3. The veteran has been assigned a service-connected disability by the United States Department of Veterans Affairs.

d. Is an out-of-state veteran who resides within 90 miles of a campus located in Alabama and has enrolled at an institution whose board of trustees has voted to allow nonresident in-state tuition for active and retired military.

(2) One who, at the time of registration, is a minor and whose supporting person is a member of the United States military on full-time active duty stationed in Alabama under orders for duties other than attending school.

(3) One who, at the time of registration, is a full-time undergraduate student enrolled at an institution whose board of trustees has authorized resident tuition rates to apply to those non-resident students receiving a partial or full scholarship award in recognition of a particular talent or ability, provided such student possessed the talent or ability at the time of initial enrollment and maintains continuous scholarship eligibility at that institution.

In addition to those students who qualify according to the University’s Residency Guidelines, the following individuals shall be charged the in-state/in-district rate, or otherwise considered a resident, for tuition purposes:

Evaluation of Connections to Alabama:

Section 16-64-3 Certification of residency; evaluation of connections with State of Alabama.
(a) An individual claiming to be a resident for purposes of this chapter shall certify by a signed statement each of the following:

(b) Though certification of an address and an intent to remain in the state indefinitely shall be prerequisites to establishing status as a resident, ultimate determination of that status shall be made by the institution by evaluating the presence or absence of connections with the State of Alabama. This evaluation shall include the consideration of all of the following connections.

(1) Consideration of the location of high school graduation.
(2) Payment of Alabama state income taxes as a resident.
(3) Ownership of a residence or other real property in the state and payment of state ad valorem taxes on the residence or property.
(4) Full-time employment in the state.
(5) Residence in the state of a spouse, parents, or children.
(6) Previous periods of residency in the state continuing for one year or more.
(7) Voter registration and voting in the state; more significantly, continuing voter registration in the state that initially occurred at least one year prior to the initial registration of the student in Alabama at a public institution of higher education.
(8) Possession of state or local licenses to do business or practice a profession in the state.
(9) Ownership of personal property in the state, payment of state taxes on the property, and possession of state license plates.
(10) Continuous physical presence in the state for a purpose other than attending school, except for temporary absences for travel, military service, and temporary employment.
(11) Membership in religious, professional, business, civic, or social organizations in the state.
(12) Maintenance in the state of checking and savings accounts, safe deposit boxes, or investment accounts.
(13) In-state address shown on selective service registration, driver’s license, automobile title registration, hunting and fishing licenses, insurance policies, stock and bond registrations, last will and testament, annuities, or retirement plans.

Factors which may show more connections with a state other than Alabama include, but are not limited to, the following:

International students may apply for residency reclassification but must have the ability to remain indefinitely in Alabama, (i.e. US Permanent Resident Card-USCIS form I-551), and also meet the requirements as listed in these guidelines.

Students who wish to apply for reclassification of residency status must do so by submitting the Application for Residency Reclassification to the Registrar’s Office no later than the first day of classes for the term for which residency reclassification is being requested. Applications must be notarized and submitted with a personal statement accompanied by supporting documentary evidence.

A student whose application has been denied by the Registrar’s Office may submit a written request for appeal within 30 days of the decision. A panel of three (3) University of Montevallo employees will review the application and render an opinion. The decision of this panel is final.

Registration payment deadlines cannot be extended for students whose residency applications are under review. If reclassification is approved, a non-resident tuition refund will be issued in the manner by which it was paid.

Application for Reclassification of Residency 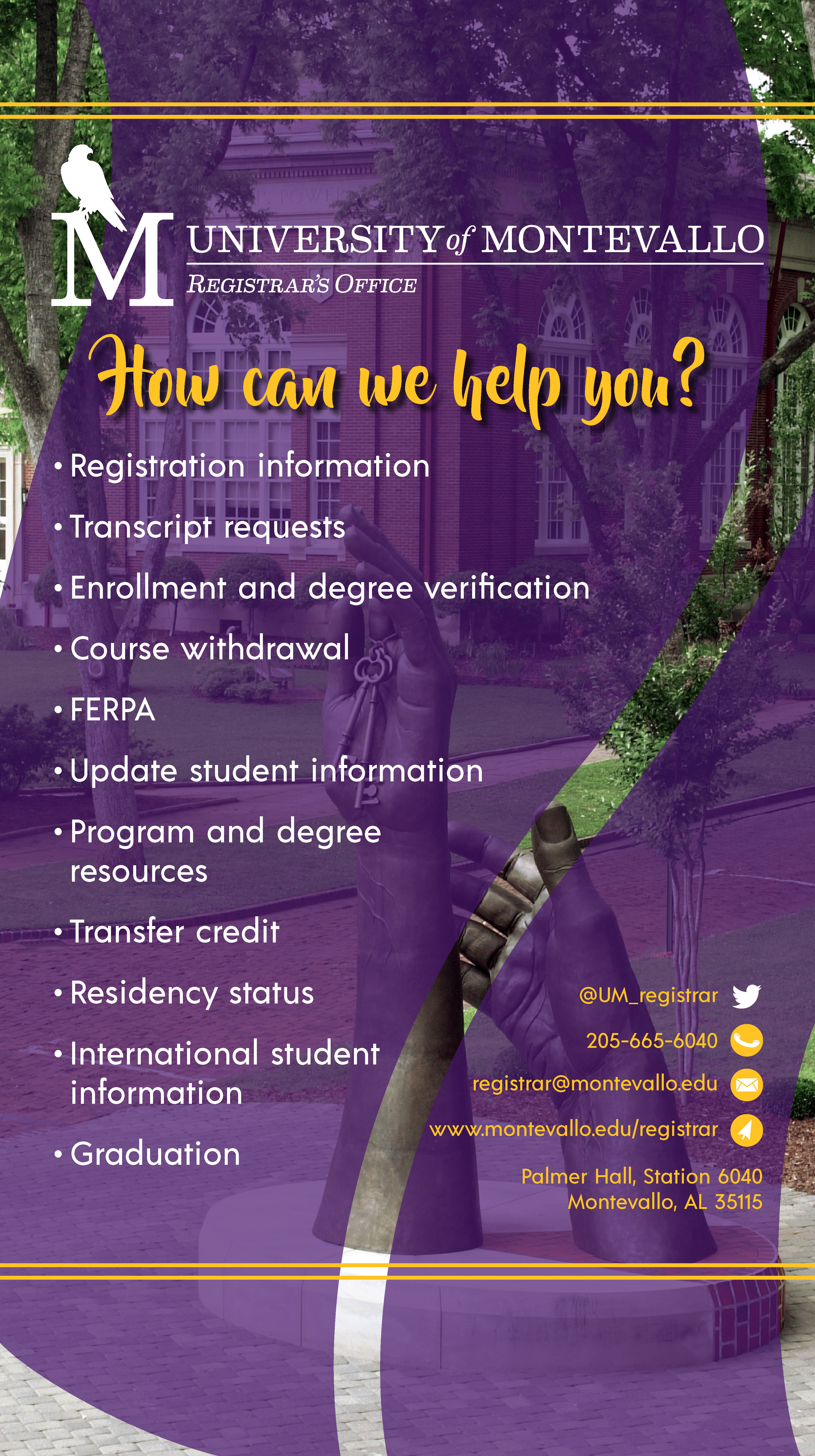