When sophomore accounting major Molly Hansen arrived on the UM campus for a tour as a high school senior, she immediately knew Montevallo was what she was looking for. 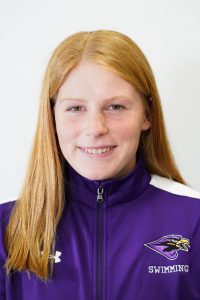 “I knew I belonged at Montevallo when I took a tour of the school during my senior year of high school and loved the vibe on campus,” she said. “The small-town culture that was reflected in the school reminded me a lot of home.”

During her time at the University, she has wasted no time in getting involved on campus and tackling leadership roles on a national stage.

In addition to being on the UM women’s swim team, Hansen also serves on the board of the University’s Student Athletic Advisory Committee and completes volunteer work in the community with her teammates throughout the year.

She recently was appointed as a member of the NCAA Division II Student-Athlete Advisory Committee. During her three-year term on the committee, Hansen will represent UM and the Gulf South Conference on a national level by providing a student-athlete voice in the NCAA’s national organization.

Despite the challenges caused by COVID-19 over the past several months, the swim team has been able to continue competing this season by live streaming its meets with other schools and comparing lap times.

Looking to the future, Hansen said she is still finalizing her plans, but would like to begin her career in the accounting field soon after she graduates in spring 2023.

“I do know I would like to settle down and start working pretty soon after graduation, and maybe go for a master’s degree,” she said.