University of Montevallo sophomore business management major Marisa Snodgrass has had a sizable impact on campus and throughout the region during her time as a UM student. 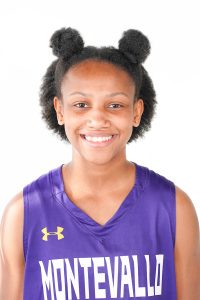 As a member of the UM women’s basketball team, Snodgrass has been a regular fixture among the Gulf South Conference’s list of awards. During her first season as a Falcon, she was named the conference’s 2019-2020 Freshman of the Year after earning GSC Freshman of the Week honors five times throughout the season.

Outside of her stellar play with the women’s basketball team, Snodgrass is also heavily involved on campus. She is a part of the Fellowship of Christian Athletes ministry, and she recently joined the National Society of Leadership and Success, an honor society and leadership program that helps students achieve personal growth, career success and empowers them to have a positive impact in their communities.

After graduating in spring 2023, Snodgrass plans to pursue a career of helping others, likely in the nonprofit sector.

Until then, she said she plans to continue enjoying the close-knit campus community at UM.

“On both the basketball and school visits, it just really had a hometown/family atmosphere. And that’s how I knew this was the place for me,” she said. “I have truly enjoyed my time at UM so far, and can’t wait to finish out. Go Falcons!”