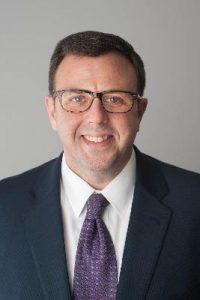 Dr. Gary Johnson serves as the Director of the Grainger Center for Professional Practice in the Michael E. Stephens College of Business at the University of Montevallo. At this
AACSB-accredited college of business, he also serves as an assistant professor of marketing and as the MBA program director. Prior to this role, Dr. Johnson served as the Comprehensive Campaign Director at the University of Montevallo where he directed the “It’s All About Family,” the University’s seven-year, $30-million fundraising campaign.

Gary is a native of Birmingham, Alabama, where he graduated from Vestavia Hills High School. He earned both a bachelor’s and a master’s in marketing from the University of Alabama. Dr. Johnson earned his Doctor of Business Administration (DBA) degree in marketing from the University of South Florida Muma College of Business in 2019. His primary research areas include alumni affinity marketing, cause-related marketing, and psychographic market segmentations.

Gary began his career at Motion Industries’ national headquarters in Birmingham where he consulted more than 100 branch locations across the country on operations and ISO 9002 quality standards. In 1999, Dr. Johnson was hired at Southern Progress, a division of Time Warner, where he worked on the advertising and marketing efforts for Southern Living, Coastal Living, and Southern Accents magazines and with a special interest publication, entrée magazine, for Neiman Marcus. Gary also worked in special market sales at Oxmoor House Books, working with national brands such as Martha Stewart Living, Williams Sonoma, Pottery Barn, Sunset Books, and Time Life Books.

After 10 years at Southern Progress, Dr. Johnson moved to Hoffman Media to serve as the Vice President and Publisher, managing more than $5 million in advertising sales and directing the marketing and sales strategies for seven regional magazines and two national titles, including Cooking with Paula Deen. Gary and his team were recognized in 2009 by Ad Week’s Hot List for achievements in advertising.

Dr. Johnson eventually left publishing to launch an insurance brokerage specializing in long-term care, but soon followed a career aspiration of working in the non-profit industry. He worked as a major gift officer at the American Red Cross Mid-Alabama District before accepting a position at the University of Montevallo in 2013 in the Office of Advancement and Alumni Affairs as the Director of the Annual Fund and Special Giving.