During his sabbatical, Kyle Moore, associate professor of theatre, completed his revision of a large-scale 3D printer that was built as part of a 2015 undergraduate research project.

The giant printer, which uses recycled plastics, was constructed to explore digital fabrication opportunities in theater, such as producing theatrical props and set pieces for University productions. 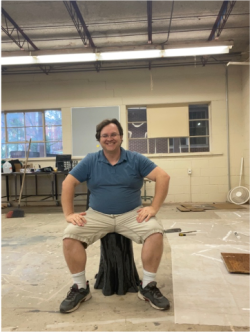 “People were intrigued with the possibility but questioned whether or not it could be done,” Moore said. “The whole project started with seven students in 2015 as an Undergraduate Research Project on how big of a 3D printer we could build with the $1,750 budget provided.”

“It worked, but there was room for improvement. We all learned a lot in that process.”

The original giant 3D printer – version 1.0 – was 8-feet long, 4-feet wide and 4-feet tall. Compared to a standard 9 by 9-inch printer, it was enormous. Most industrial 3D printers are typically in the 3-foot range, with a price tag starting around $10,000.

Version 2.0 started when Moore was awarded a Teaching and Scholarly Projects Grant and approved for a sabbatical in the spring of 2022. He also received a grant from the Green Fund, which provides grants for campus projects that improve sustainability, decrease ecological footprints and educate the University and local communities about sustainable practices, environmental issues and caring for the planet.

Moore used the Green Fund Grant to purchase a pellet extruder that uses plastic flakes and pellets instead of filaments like most 3D printers. This allowed the printer to use recycled plastics that he collects from recycling bins in the Center for the Arts.

As part of the Green Fund Grant, he’s using recycled plastic to print furniture pieces that will be placed on UM’s campus to bring awareness to green issues and demonstrate the possibilities of recycling. Moore plans to use this technology to achieve one of his long-term goals of printing an entire theatrical set. 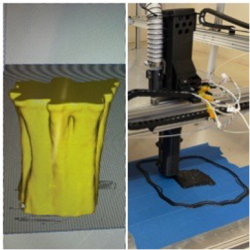 He’s already used the printer to print a chess table set that will be installed on the bottom floor of Carmichael Library. The piece is comprised of two tree-trunk-shaped stools, a tree-trunk-shaped table and a complete chess board with pieces.

Prior to his employment at Montevallo, Moore was interested in 3D printing but had no hands-on experience doing it. After researching the potential applications for it in a theatrical setting, he helped UM purchase its first 3D printer.

He’s used that knowledge and the printer in almost every Theatre Department production in the past 7 years. Also, in 2018, he started teaching May term intensive course: “Build Your Own 3D Printer.”