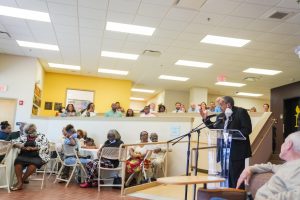 Fallin M.A. ’89 served as director of minority affairs at the University from 1988 to 1999 and was a history professor at Montevallo for 28 years, retiring in 2020. In May 2021, the UM Board of Trustees established the “Dr. Wilson Fallin Jr. Lecture Series” to honor the history professor emeritus’ dedication to civil rights, as he was a consistent and fearless supporter of numerous efforts in the area of civil rights and social justice.

“The University community is thrilled to name this prominent building, which is located at the forefront of our campus, after Dr. Wilson Fallin Jr. It says so much about our institution’s ethos and culture that we honor a faculty member who has changed so many lives over the years with his passionate teaching, scholarship and civil rights advocacy. This is a historic moment for our University, and we are proud that the home of our Behavioral and Social Sciences Program will bear Dr. Fallin’s name,” said Dr. John W. Stewart III, president of the University.

Stewart acknowledged he and Fallin’s 12-year friendship, thanked him for his service and thanked the City of Montevallo and Shelby County for their initial support in helping UM obtain the building.

Board of Trustees Chairman Todd Strange ’66 thanked Fallin for guiding hundreds of young lives through the years and said the board was honored to put his name on the building.

LeRoy Nix ’03, chair of the board’s building renaming committee and a former student of Fallin who led the charge to get the building dedicated in his honor, said the event was one of the most exciting professional experiences of his life.

“When I think about your contribution and impact on this University, I think of the word legacy,” Nix said. “…Legacy is not just a definition but a destination. And your legacy is one that will live on forever.”

Dr. Ruth Truss ’82, dean of the College of Arts and Sciences, recounted how Fallin was always primarily a historian, but also more than that.

Fallin expressed his deep appreciation for the kind words spoken of him, and the building dedication – something he said he would have never imagined.

“This is not something I sought,” he said. “After the lecture series was named for me, someone said, ‘we’re going to name a building after you.’ I didn’t think that would happen in my wildest dreams.”

He paid tribute to his family, particularly his wife of 52 years, Barbara Dixon Fallin, their children, grandchildren, friends, colleagues and his former students.

He concluded by thanking Stewart for allowing him to continue in his career as a pastor while simultaneously working as a professor.

Fallin will serve as the keynote speaker for the spring 2022 commencement ceremony May 7, at 9 a.m. on Flowerhill Lawn.

The University of Montevallo will host a number of youth summer camps on its campus in June. Registration is now open for the following opportunities: Bass Fishing Camp The UM fishing team, reigning Bass Pro Shops School of the Year, will host a four-day Bass Fishing Camp June 20-23, from 9 a.m. to 3 p.m. […]

Fallin Encourages Spring Graduates to Strive for Better Than Your Best

In April, nearly 30 students from the University of Montevallo traveled to the Alabama Coast for a two-day trip focused on coastal ecosystems and sustainability through hands-on learning. The students were split into two groups of 14. One group was a part of the Environmental Studies Program with Dr. Susan Caplow, an associate professor of […]