It didn’t take long for University of Montevallo senior Torian Blackburn to know she had found the right collegiate home after she arrived on campus. 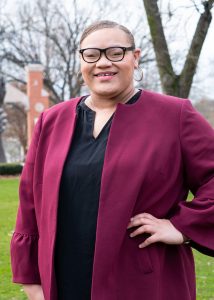 “I knew I belonged at Montevallo when I first stepped on the campus and it felt like home,” Blackburn said. “I felt like that was validated when I joined my sorority and I met alums from Montevallo who were very supportive. It has given me opportunities that I wouldn’t have gotten anywhere else.”

Blackburn is wrapping up a business degree with a minor in accounting, and will graduate in May. After graduation, she plans to seek a career in community development for a financial institution or in the public sector with the federal government, while also likely working toward a Master in Business Administration degree.

The past few years have been filled with campus involvement for Blackburn. She is the former president of the Mu Mu chapter of Alpha Kappa Alpha Sorority Inc., is the secretary for the National Panhellenic Council, is vice president of involvement for Future Alumni of Montevallo, is the former membership director of the Phi Chi Theta business fraternity and has served on the Purple Side cabinet.

Through connections she’s developed with UM alumni during her time as a student, Blackburn secured an internship with Renasant Bank last summer, and helped the bank develop a women’s financial empowerment program called “The Nest.”

“I chose to earn a business degree because it’s so broad. You can really get into anything with a business degree,” she said. “That’s what really attracted me, and it seems to be going pretty well.”