University of Montevallo senior Justin Greene will forever have a place in the University’s history books. 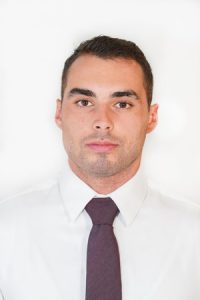 As one of the founding members of the UM men’s lacrosse team, Greene and his teammates helped to pave the way for generations to come.

“I am very proud of the fact that I and my fellow seniors were able to help lay the groundwork for the men’s lacrosse team and set the standard for what it means to play as a Falcon,” said Greene, who is a midfielder on the team and served as team captain during his junior and senior years.

A native of Samford, Connecticut, Greene found a new family away from home and knew he belonged at UM quickly after arriving on campus as a freshman.

“I knew I belonged at Montevallo as soon as I got on the bricks and met my teammates,” he said. “It immediately felt like a brotherhood, and I couldn’t be any more fortunate to be a part of the program here.”

Greene has also been a member of the ATO fraternity since his sophomore year.

During his playing career at UM, Greene has earned numerous accolades, including the James. R. Spalding Sportsmanship Award and being named to the GEICO Academic All-Great Lakes Valley Conference list in 2018 and 2019.

As an accounting major who will graduate in May, Greene plans to serve as a commissioned officer in the U.S. Marine Corps after college.

Alabama Gov. Kay Ivey has appointed Cynthia Todd to serve on the University of Montevallo Board of Trustees. Todd is the first Black woman to serve as a UM trustee. “I appreciate you serving in this capacity, and I am confident you will render valuable service to the citizens of Alabama,” Ivey stated in a letter […]

After competing online in 2020 due to the pandemic, the University of Montevallo’s Model United Nations team triumphantly returned to in-person competition and won a conference-wide Outstanding Position Paper and a Best Delegate award for the INTERPOL committee at the 2021 Southern Regional Model United Nations conference in Atlanta at the end of November. Dr. […]

UM Named Among Best Nutrition and Wellness Programs in the Nation

Intelligent magazine ranked the University of Montevallo’s Nutrition and Wellness Program as the fourth best nutrition degree program in the nation and the best nutrition program in the South in its Best Nutrition Degree Programs of 2022 rankings. Intelligent magazine,  which is centered around a lifelong commitment to continuous improvement, assessed 190 universities and colleges […]