When senior political science major Kendall Criswell visited campus with her family for the first time, she immediately knew she belonged at Montevallo.

And it didn’t take long after setting foot on campus to convince Criswell’s father, who initially wasn’t sure what to expect from the small-university atmosphere, Montevallo was the right fit for his daughter. 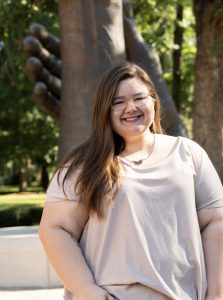 “After we toured campus and spoke with some professors in my major, he loved it. He said ‘This is where you need to be,’” Criswell said.

Originally a mass communication major, Criswell took a few classes taught by Associate Professor of Mass Communication Dr. Bruce Finklea, who Criswell didn’t hesitate to call one of her favorite professors and the reason she originally wanted to attend UM.

Criswell recently completed an internship in Washington, D.C., and ultimately plans to work there again in the future. After graduating in May 2020, Criswell plans to attend graduate school and then pursue a doctorate in public policy.

During her time at UM, Criswell has been involved in Freshman Forum, SGA Executive Cabinet and the RA Association. She currently is the senior class president, is an RA in Ramsay Hall, is an honor student, leads Students for Bernie and is involved in the SGA and the Secular Student Alliance.

“I can’t imagine being anywhere else,” Criswell said.