University of Montevallo senior Katherine Pearce has already mapped out her plan for the future, and she is laser-focused on achieving the personal and professional goals she has set for herself. 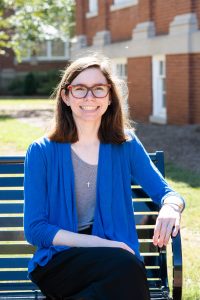 Pearce, a retail merchandising major who is also minoring in business, plans to earn her Master of Business Administration immediately after earning her undergrad.

From there, she plans to start her own business in the fashion industry.

During her time at Montevallo, Pearce has had plenty of support from her professors and classmates, and she credits both with helping her achieve academic success.

“I love how close I’ve been able to get with my professors. It’s a small department, and that’s nice because I literally know everyone here,” Pearce said of the Family and Consumer Sciences Department.

She has been involved with the FCS Student Group, the Honors Program, The Alabamian and is the student union president for the Alabama Association of Family and Consumer Sciences.

“It’s been really great, especially with the honors housing because you can be close to people who have the same mindset academically, and the honors professors are great to work with,” she said.

From the first time she set foot on the brick-lined streets of UM’s campus, she knew she belonged.

“I went on a few college tours, and when I got to Montevallo’s campus, it just felt right,” Pearce said.