UM freshman Jered Poland, a biology major and swim team member from Baton Rouge, Louisiana, had visited larger universities while choosing his higher education destination, but none could top the kind of personalized attention he found at Montevallo. 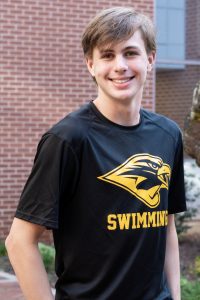 “The personalized classes were a big draw for me. There’s more one-on-one with your professors instead of having a large classroom,” Poland said. “I looked at larger universities before I came here. I didn’t feel like I would really belong there because I would feel like just a number instead of a person. I feel like I belong somewhere personalized like Montevallo.”

Only a few months into his collegiate journey, Poland has found he belongs at UM in many ways. He is looking to get involved in campus organizations, he recently volunteered at the city of Montevallo’s Tinglewood Festival and he has found a family away from home in the recently established UM swim team.

“The swim team has been like a second family to me,” Poland said. “We’re practicing hard now, and we’re looking forward to our first meet in October.”

After earning his bachelor’s degree in biology, Poland plans to attend medical school, and has goals of eventually becoming a medical researcher focusing on the complexities of the human brain.