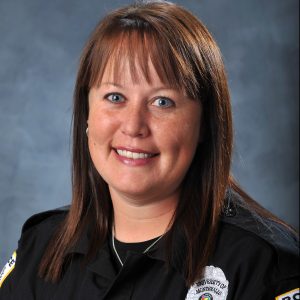 Officer Jill Sanders, of Calera, has been recognized as the University of Montevallo Police Department’s Officer of the Year for 2018.

Sanders joined the UMPD in March 2011 and has since spent the majority of her time working the night shift. As of late, she has been called on to cover extra shifts due to coworkers’ leave of absence.

Sanders also recently opened her home to an elderly resident of Montevallo who was unable to travel out of town with her family, allowing the rest of the family to travel with the knowledge that their loved one was being cared for. According to UMPD Chief of Police Tim Alexander, such behavior is not out-of-the-ordinary for the officer.

“Jill has always graciously gone the extra mile to take care of the students at UM and the citizens of Montevallo,” said Alexander.

The UMPD would like to thank Sanders for her loyal, dedicated service to the University of Montevallo and the Montevallo community.

During his sabbatical, Kyle Moore, associate professor of theatre, completed his revision of a large-scale 3D printer that was built as part of a 2015 undergraduate research project. The giant printer, which uses recycled plastics, was constructed to explore digital fabrication opportunities in theater, such as producing theatrical props and set pieces for University productions. […]