Cat Whitehill, a member of the gold-medal-winning 2004 U.S. women’s Olympic soccer team and veteran of two FIFA Women’s World Cups, encouraged a group of Olympic hopefuls to train hard to achieve their dreams during a July 19 visit to the University of Montevallo. 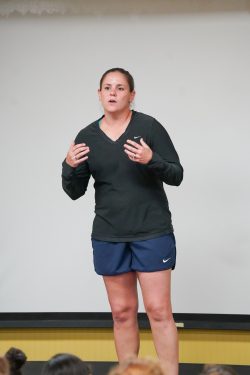 The camp’s director, Andrea Barnett, said UM has provided an ideal location for the camp for many years, and praised UM Director of Facility and Event Scheduling Marion Brown for ensuring the camp runs smoothly.

“The University is located in a small, safe place that is ideal for bringing groups of girls on campus. There are multiple fields for training and an auditorium and classrooms to use for indoor sessions and evaluations. Everything is in walking distance and easy to get to,” Barnett said. “From an administrative perspective, the University has always been accommodating and willing to do anything to make our stay more comfortable. We appreciate everything the University and staff does for us during our time there.”

During her visit to UM, Whitehill told camp participants she got her first opportunity to play with her peers through the Olympic Development Program, and said she worked hard to improve her skills and get noticed in a crowded pool of talented soccer players from throughout the nation early in her career.

Eventually, her hard work translated into a collegiate playing career at the University of North Carolina, where she was part of the 2000 and 2003 NCAA championship teams and earned All-American honors four times.

“A lot of that had to do with hard work I did on my own, and belief in myself,” she told camp attendees. “It did not come easily, but if you keep working hard and improving, success will follow.”

Whitehill spoke to camp participants about the importance of never giving up and working through adverse situations. After tearing her ACL in 2008, she thought about giving up her playing career, but was able to work through 18 months of rehabilitation to return to professional soccer.

She has had a significant impact off the field as well, as she argued in support of Title IX during a 2006 U.S. Senate hearing to uphold the law requiring schools to provide females the same access to sports males are afforded.

“We stood together as strong women to make the path easier for people like you,” Whitehill told camp participants. “If we stand together and believe in ourselves, there is so much we can accomplish. I want to empower you to be more tomorrow than you are today.”

The University of Montevallo has hired Jennifer Nichols as the first head coach of the University’s collegiate cycling team. Nichols previously served as the team director and coach of the Helena High School Mountain Bike Team from September 2019 to July 2022. She is USA Cycling Safe Sport trained, has a coaching certification from the […]

The University of Montevallo has been designated as a 2022-2023 Military Spouse Friendly School for creating sustainable and meaningful education paths for military spouses. This honor comes just three months after UM was named a Military Friendly School for both the 2021-2022 and 2022-2023 cycles – a designation UM has received numerous times in previous […]