As student-athlete DaShaun Morgan stood on the podium at the NCAA Division II national track and field meet in Kingsville, Texas, on May 23, he knew his coaches were right. After Morgan arrived on campus as a freshman the previous year, his coaches told him to expect nothing but greatness from himself. 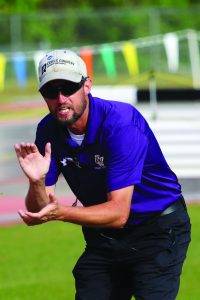 When Morgan met UM men’s track and field coach Tommy Barksdale and the other members of the team’s coaching staff, he admitted he wasn’t sure he could achieve the lofty goals they had set for him.

“I had a lack of self-confidence, but my coaches told me to stay with it, and they told me I could be an All-American. I didn’t believe in myself at that time, so when I became an All-American, I was speechless. It was a wonderful feeling,” Morgan said. “All that hard work had paid off.”

Morgan capped off a record-breaking sophomore season in May by recording the highest finish ever by a UM student-athlete in an individual competition at the Division II level. At the national meet, Morgan finished fourth in the nation in the men’s long jump competition, earning All-American honors in the process.

In early May, Morgan achieved a first for the UM men’s track and field program when he qualified to compete in the national championship, following his attempt of 7.55 meters in the Falcon Finale competition at the Montevallo track and field complex.

Morgan, a native of Biloxi, Mississippi, was also named the Gulf South Conference Field Athlete of the Year in May after finishing first in the long jump competition at the GSC Championship meet. There, he also finished third in the triple jump competition and fourth in the high jump competition.

Despite his unprecedented success, Morgan was quick to shift the spotlight away from himself and onto his teammates, coaches and the Falcon family.

“The environment I’m in at Montevallo, whether it’s a practice or a meet or just walking around campus, everyone has been so welcoming and so supportive,” Morgan said. “It’s all love. It’s all about helping each other to get better and better each day. My coaches have developed me into being a better man.”

Over the past few years, Barksdale has worked to build the Falcon track and field program into one of the best in the Gulf South Conference, and is starting to make some noise on the Division II national level.

“We’ve had a lot of success in women’s cross-country over the years, and our goal has been to bring that success to all of our track and field programs,” Barksdale said. “We don’t want to just be a good distance program, we want to be great at everything we do.”

Barksdale contributed the program’s success to his coaching staff and the buy-in and work ethic the student-athletes have shown under their leadership, and said the future looks promising for the program.

“We’ve got a great recruiting class coming in, and I’m very excited about that,” Barksdale said. “We want to be nationally relevant and continue to climb up the ladder in our conference, because success in our conference will mirror success at nationals.”

Barksdale sees Morgan’s success at the Gulf South Conference championship and the Division II national championship as a stepping stone to greater achievements in the future for the Montevallo track and field program.

Morgan said he is ready to play his part in keeping the Falcons on the podium at future national championship meets. Entering his junior year in the fall, Morgan said he plans to strengthen his leadership qualities to ensure the program’s future is in good hands.

“I want to be a better leader and a better mentor to the recruits coming in next year,” Morgan said. “I want to show them that hard work always pays off. You just have to keep pushing yourself every day.”

During his time reflecting on the 2019 track and field season, Morgan frequently used the word “family.”

“Without my teammates and coaches supporting me and challenging me to work harder every day, none of this would have been possible,” Morgan said. “At Montevallo, it really is a family.”