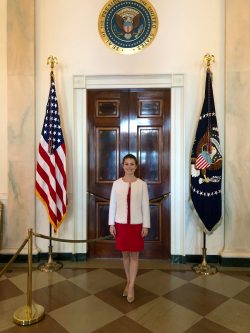 Mary Light’s hustle to begin a career in politics started as a pre-teen. In middle school, her extracurricular activities involved serving as a page for various state senators and legislators along with more traditional pursuits like music and athletics.

Approximately 10 years later, Light is now in her senior year as a communication studies and political science double major, just recently finishing an internship in the White House.

Light has a quiet, but consistent confidence. During her freshman year of college, she had the fortitude to call up the office of U.S. Rep. Martha Roby for info for Light’s upcoming speech in a 101 class. Two years later, those early networking skills landed her an internship in Roby’s D.C. office.

Despite her already impressive resumé, Light said she felt a lot of doubt and apprehension when she submitted her application packet to the White House earlier this year. Those initial fears worsened as the summer crept closer and Light had only received rejection letters from the other internship programs she had applied for.

When an email from the White House landed in her inbox, she almost didn’t open it, fearing yet another rejection. However, her eyes locked in onto a key word: “Congratulations.”

Only a month later, her morning began with glimpses of the Washington Monument and the Lincoln Memorial on her walk to work. “As a political science student, and quite frankly as a tremendous nerd, it was just so cool,” Light said about working on Capitol Hill. “It was never lost on me, where I was and the importance of everything around me.”

She worked in the White House’s gift and protocol office — a section of the much larger office of presidential correspondence. While there, she logged constituent policy concerns for reports to senior officials, processed requests for aid from federal agencies and assisted with digitization procedures to improve inventory management.

Light credits her experience working within groups and teams in her communication studies courses as an immense help during her day-to-day tasks in the White House.

In her downtime, Light even had the chance to connect with UM alumni in D.C., such as Willie Phillips ’00 and Amos Snead ’02. From these alumni, she learned about the long lineage of UM alumni giving fellow alumni a couch to sleep on as they pursued careers in the U.S. Capitol.

Light spent three months at the White House furthering her education with hands-on experience. When her internship ended Aug. 10, she immediately left D.C. to return to campus on Aug. 12 to help her Chi Omega sisters with recruitment. Her campus involvement doesn’t end there. She has been an active member of College Night, honor societies and SGA. Her current position with SGA is student trustee on the UM Board of Trustees.

As graduation approaches, Light is busy preparing not only for her final semester, but her path back to D.C. Once she gets there, her next step will be conquering the LSAT, which she hopes will begin the path to the rest of her career in the political realm.

While faculty and staff at the University commend Light for her determination and ambition, she says Montevallo is the reason she has assembled such a strong path forward.

“I am who I am because Montevallo has helped me put all of the pieces together and make sense of the puzzle,” said Light.