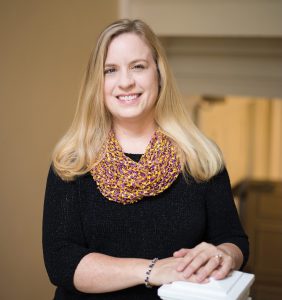 Few faculty are as deeply rooted at the University as Dr. Kristen Gilbert, professor of psychology. Her academic journey has taken her across the U.S., but also continuously strengthened her connections at UM and encouraged her to grow. In addition to her role as professor, Gilbert was recently named assistant provost of assessment and accreditation.

The Montevallo seeds were planted when Gilbert was in high school and attended the famed College Night. She was immediately hooked. “College Night helped me fall in love with Montevallo before I was even a student,” Gilbert said. “I was amazed that a university would create such an amazing opportunity for students.”

As an undergrad, she jumped right into the field of psychology. “I was scared of everything about the department, including the professors,” she said. “But I soon learned that, while the classes were challenging, they were also interesting and the faculty were helpful. The challenges in those classes helped me become a better student and prepared me for graduate school.”

Since returning to the University in 1998, she has worked hard to do what her professors did for her when she was a Montevallo student. “All the research I have done with undergraduates has been the most meaningful for me,” Gilbert said. “When I was an undergraduate, the first research project I completed with Dr. Irene Staik began my career as a psychologist. That work was instrumental in laying a path for me to attend graduate school. Every time I get to pay that back by working with students to help them learn how to do research and explore psychology is exciting and rewarding for me.”

Gilbert spent several years as an assistant professor at Pepperdine University in Malibu, California, but when a former professor told her about a job opening at the University of Montevallo, she couldn’t resist. “I honestly am not certain that I would have left Pepperdine for any other institution,” she said. She and her husband, Dr. Gregory Reece, were excited to return home. They have raised two children, Olivia and Sam, in the same town she’d fallen in love with as a student.

Now firmly planted in Montevallo, Gilbert helps shape and prepare Montevallo students for their academic and professional journeys, walks the same beautiful campus with her children and still participates in her favorite UM tradition — College Night. While she never took the stage as a student, as a faculty member, she’s served several years on the College Night Committee and most recently on the College Night Centennial Committee.

Though College Night was and remains her favorite UM tradition, Gilbert cherishes all the traditions and connections that have molded her, her academic career and now her family.

“I am so fortunate to have treasured friendships with alums and faculty from way back in my undergraduate years, all the way to colleagues and former students I’ve met during my 20 years working at the University,” Dr. Gilbert said. “My two children were practically raised on campus. Perhaps more formative than any campus experience was their time as preschool students at the Child Study Center. Parents of those children still gather on a weekly basis even though most of our children are college students now. They are my neighbors, friends and colleagues — all brought together by a UM tradition.”

By Emily Reed After being named UM’s chief diversity and inclusion officer in 2020, Dr. Gregory Samuels has spent much of his time working to promote an all-inclusive campus environment. “My goals center around having a campus that strengthens, advances and sustains increased diversity, equity and inclusion and actively promotes social justice,” Samuels said. Samuels […]