For a school Ray Driver Jr. ’89 had never heard of before the end of his senior year in high school, he said he owes the University of Montevallo quite a debt.

Driver was on his way to the University of Georgia when at the last minute he decided he needed to attend college closer to home so he could be near his girlfriend. 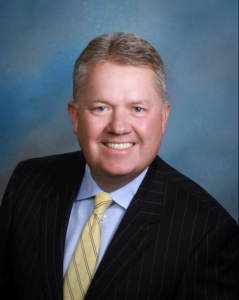 He asked his guidance counselor to help him find scholarships to schools in the Birmingham area and the University of Montevallo came up. Though he never heard of the institution, one of his baseball teammates was going to Montevallo. He called him, and a week later he took a college tour.

No further convincing was needed. UM was home.

“I knew I belonged at Montevallo when I met a group of Alpha Tau Omegas during rush,” Driver said.

Driver and his girlfriend broke up a few weeks later. But his relationship with Montevallo persevered. He graduated in 1989 with a bachelor’s degree in accounting and went on to earn his law degree from the University of Florida.

He’s now a lawyer at Driver, McAfee, Hawthorne & Diebenow PLLC, a transactional law firm in Jacksonville, Florida. He is a past member of the Michael E. Stephens Advisory Board, serves on the board of trustees for Jacksonville University and is chair of the Jacksonville Regional Chamber of Commerce – one of the largest chambers in the country. In 2019, he was appointed to the Jacksonville Transportation Authority by Florida Gov. Ron DeSantis.

Driver said a great deal of his success is owed to the education he received at Montevallo.

“Montevallo changed my life,” he said. “I was raw, and I think I would have gotten swallowed up at Georgia. The small class sizes in the accounting program helped give me a great education, and I loved the size of the campus and the student body.”

Driver said some of his fondest memories at UM was “guarding the rock” as a pledge, throwing his fraternity brothers in the lake when they got pinned and playing intramural sports.

In gratitude to the University, he created the G. Ray Driver Jr. Endowed Scholarship for Accounting Majors established in November 2019.

“It’s a small way for me to hopefully help Montevallo change other students’ lives,” he said. “I’ve been very fortunate and it’s important to give some of that back. I think it’s what makes the world go round.”

His advice to current students: “Don’t underestimate the importance of a wellrounded education and networking. Also, don’t be afraid to surround yourself with people smarter than you.”

Driver and his wife, Lisa, have four children and live in Jacksonville, Florida.