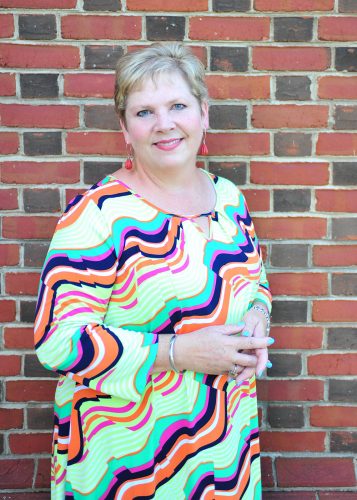 “It was a campus visit to the middle of nowhere.” Little did she realize it at the time, but that visit to the University of Montevallo would open the door to a new community, a new family, and a new home for former Decatur, Ala. native, Melanie Poole ’86.

Melanie knew about Montevallo through her mom’s friendship with Betina Pearson Higdon Burns ’41 and her English teacher Alice Ackley, but she thought she wanted to study art at Auburn.

To her surprise, Melanie found herself being recruited by Billy Cannon, former director of UM admissions. Montevallo offered her generous scholarship support, and after getting both Dr. Frank McCoy, former chair of the art department, and Dr. John Stewart, former UM president, on the phone with her mom, the deal was sealed. “Auburn didn’t offer me a scholarship, and although I had a good offer from Alabama, the school wasn’t a good fit for me. I didn’t want to be a small fish in a big pond, and I found at the University of Montevallo that I could be a big fish in a small pond. I had more contact with professors and more leadership opportunities, like College Night. I participated every year and became a Gold Side leader. I haven’t missed a performance since 1982.”

“We didn’t have computers for commercial art classes when I was a student in the early 1980s. All design had to be done by hand. I’m grateful for that experience, because I believe it made me a stronger designer,” Poole said. She graduated in 1986 and began her career in Birmingham at Yeilding Department store, where she worked for 10 years as their advertising director.

During this time, she moved to Smith Lake in Walker County, where she stayed for the next 26 years. She also left Yeilding and started her own business, The Design Poole. After her mother’s passing in 2013, she returned to Montevallo to work as the communications officer at The American Village. “Tom Walker, a friend and fellow Montevallo grad, asked me to join his team at The American Village. I told him he was the only person I was willing to leave self-employment to work for. He is an inspiration, a wonderful steward and a visionary.”

Melanie has served on the alumni council and the alumni board, taking several leadership roles as the president-elect, president, and past president. During her 10-year tenure, the alumni board helped hire two new presidents and organized the alumni centennial celebration. Her experience on the alumni board has been particularly meaningful to Melanie’s Montevallo story. “It gave me the opportunity to meet alumni from different decades. I became close to the ’50s alumnae, and Libby Queen ’59 in particular. They adopted me and my mom, who would come back with me for homecoming weekends, into their group. They showed me how to conduct myself as an alumna. They demonstrated loyalty and philanthropy, and they helped me understand that philanthropy is about more than just a monetary gift. It also includes an investment of time and talent.”

Melanie’s investment in the University over time exemplifies her understanding of their lessons to her. “My first gift was my senior class gift, which seemed significant at the time. That contribution led to larger gifts over time. I support the art department and am glad to see the growth of the department from Bloch, to Peterson Hall, to the 3-D Art building, and now to the anticipated construction of the Center for the Arts. I like that the proposed location serves as a bridge between the city and the University, as the new center has the potential to bring in visiting artists, traveling exhibitions and performances that will benefit all Montevallo residents.”

On March 1, 2017, Melanie pledged to name the Melanie Poole Art Gallery in the new Center for the Arts. “I always joked about someday having a Poole Hall at Montevallo, but now there will be a Poole Gallery. Both of my parents were educators and would have been proud to see the Poole name on a college campus.”

Melanie’s gifts support the University’s comprehensive fundraising campaign The Campaign for the University of Montevallo: It’s About Family, a multi-million dollar investment in the knowledge, expertise and values that Montevallo graduates take into their lives and into their professions.

She concludes, “Someone once told me the value of your diploma is only as good as the current state of your alma mater. Alumni helped make the University of Montevallo a top-notch institution for me, now it’s my turn to give back. It’s up to alumni to help ensure the high standards and first-class facilities from which future students will benefit.”

You can read more of Melanie’s story in the current issue of Montevallo Today. For more information about The Campaign for Montevallo: Its About Family, contact Gary Johnson, Comprehensive Campaign Director, at 205-665-6217.