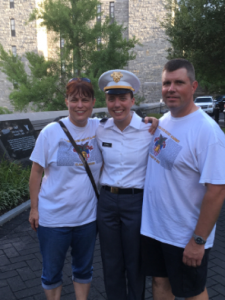 At the University of Montevallo, we put an emphasis on family that includes our faculty and students, retirees, and an extended network of alumni. We have graduates spread out all over the country and around the world who remain connected to this University. One such alumnus is Jack Schnell. Jack graduated from the University of Montevallo in 1992 with a BBA degree (emphasis in accounting). Although he now lives in Plano, Texas, he understands the importance of giving back to the place that has given him so many opportunities in his career.

Bob Schnell, Jack’s father, worked as a chemical engineer, and the family moved around often during his childhood. Despite his demanding job responsibilities, Bob made time for his children, teaching Jack values that included giving back and helping when he could. Jack still travels to Alabama to visit his mother, Lavonne, who lives in Birmingham, and who he describes as always being there for him and his sisters.

The family was living in Alabama when Jack graduated high school. He found the University of Montevallo to be a school that fit his desire to have a small college experience while working on his accounting degree. Jack was an active student, a member of the Delta Chi fraternity and an athlete, participating in many sports including softball, basketball, and golf. He developed a strong work ethic and met lifelong friends on campus. He recalls being able to talk to professors and friends about the things that were going on in his life, and he believes that his experience in the classroom and the support he received as a student helped him be successful in his career.

Jack and his wife, Marianne, met in St. Louis, Missouri, where they both worked for the same company. After they got married, he took a job back in Alabama for a few years before the family settled in Plano in 2001. Jack and Marianne enrolled their daughter, Corinne, at Prince of Peace Christian School (Carrollton, TX), where Marianne accepted a job offer for a staff position and began a career that has expanded into her current role as a history and English teacher. Today, Jack is the CFO/controller for the investment firm Houghton Capital. Corinne is currently a cadet in the United States Military Academy at West Point. She inherited her father’s love of sports, with her skills on the basketball court helping her to be accepted as a corps-sport (varsity) athlete into West Point.

Jack’s encouragement to students and alumni of the University of Montevallo is to “Find what you enjoy and relentlessly pursue it, because success becomes more natural when your hard work and dedication is focused on your interests. Remember the professors and curriculum at Montevallo that helped you get started to where you are today. College was a necessity that helped me enter the business world as a young adult, and I have been able to advance professionally because of what I initially learned there. I get a letter every year asking me to help because there’s a need, and I give every year because of what Montevallo did for me.”

The University of Montevallo recently announced the public phase of its first-ever comprehensive fundraising campaign, The Campaign for Montevallo: It’s About Family, which will ensure that Montevallo continues its emphasis on the enterprise of teaching and learning. For more than twenty years, Jack has given back to the College of Business, and his gifts help to ensure the next generation of Montevallo graduates receive the business knowledge and skills needed to be successful in today’s business environment.