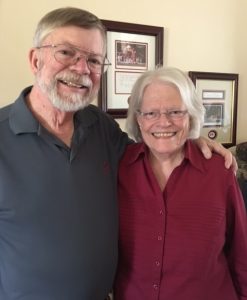 It’s been more than 50 years since alumnus Fred Cooper graduated from Alabama College in 1965, but scarcely a week goes by that he’s not reminded of the University’s impact on his life.

As a youth, Fred lived with his father, who was also his primary caregiver. He was shy and lacked self-confidence, and he had a reputation as the skinny, quiet kid. He wanted to change his image, and college was the opportunity he needed to reinvent himself.

He received a letter from Alabama College’s registrar’s office, and enclosed was an offer for an honors scholarship based on his ACT scores. He visited campus and recalls thinking, “This is neat!” He didn’t want to visit another campus, so he accepted the scholarship and enrolled for the fall semester of 1961.

He started hanging around The Alabamian office. There, he learned how to write, a skill that helped shape his career in communications after graduation. He also became interested in theater, an extracurricular activity that pulled him out of his shell and gave him an opportunity to co-author the 1963 Gold side winning show.

In the meantime, his academics were suffering because he wasn’t balancing school work with his extracurricular activities. At the end of his freshman year, he received notice that he was not eligible to renew his Honors Scholarship. Thanks to the intervention of Minnie Lou Warnke in the business office, Fred applied for and received a National Defense Education Loan. He was also hired as a student writer/photographer for the College News Bureau. Together, the loan and his salary provided enough money for Fred to pay for his tuition and stay in school.

Fred graduated and went to work at Shelby County High School. After a year of teaching, he enlisted in the Air Force. When he came home, he worked at the Jefferson County Family Court as a probation officer, where he stayed for five years and earned a Master’s degree by going to class at night. He continued writing, eventually winning two APA awards for a weekly Shelby County newspaper column. He made another career move to the Health Department to manage their communications and public relations. His weekly half-hour public television talk show, “Advances in Health,” won a Medical Association of the State of Alabama Award for medical reporting. Finally, fellow Alabama College alumnus Dr. Jack Hawkins called. Jack was at UAB, and he hired Fred as Director of Community Relations at his UAB school. Fred retired from UAB after 21 years of service.

Fred met his wife, Suzie, through members of his company’s softball team in 1982. She was born and raised in Tuscaloosa but had lived much of her adult life within a few miles of Fred in Birmingham. She was working for a medical software company. They were married in 1984.

Suzie has visited Montevallo’s campus many times in the years she and Fred have been together. She enjoys visiting the place he considers to be his first permanent home. She compares his experience on a small campus to her own on the large, sprawling University of Alabama campus, “He was able to make these lifelong ties, and that’s something I don’t have from my own college experience,” she said.

In 2015, the couple attended Fred’s 50th class year reunion, where they met UM Alumni Director Dr. Tracy Rockco. She was interested in the memorabilia Fred had brought with him and they connected almost immediately. Fred shared his story of losing his scholarship, needing an emergency loan and his desire to find a way to help students like him. Tracy connected him to the Office of Advancement where he and Suzie established the Fred and Suzanne Cooper Emergency Assistance Fund.

Fred had already made a gift to UM in his estate but he wanted to create something more immediately impactful. “I didn’t want to wait to be able to help students. I had the means to make an immediate gift that could be used right away. The students who receive help aren’t required to pay anything back. However, because it’s endowed and only the earnings will be given away, it will be there for a long time to help students who find themselves in a situation similar to what I faced,” he shared.

Suzie was moved to be a part of the opportunity because of her experience with Fred. “He has shared with me how hard that time was for him, and I see his passion for helping students,” she said. “I experienced my own emergency when my father passed away at a young age. I was one of three children, and I had to have scholarships to pay for my school. He was an educator, and I think I’m interested in seeing students succeed because of his influence.”