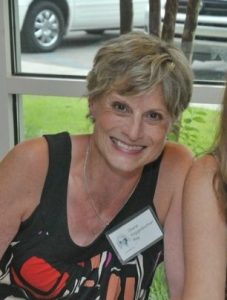 At the University of Montevallo, every individual that walks these brick pathways becomes a member of the Montevallo family. Students, alumni, faculty members and friends have all played a part in making the University what it is today. No matter where life takes you, you will always have a place in this ever-growing family tree. One such member of the Montevallo family is Ms. Diane Higginbotham Ray, class of 1968.

Diane attended John Carroll Catholic High School before coming to the University of Montevallo in 1964. The University was recommended to her by her mentors Marie Zannis and Kay McGraw. She describes Montevallo as having a very friendly atmosphere in which everybody speaks to everybody, a tradition that still holds true today. She asserts that she received a fantastic social education because her roommate, Sandy Wheale Klassen ’68, and other new friends encouraged her to be more involved and make new friends. Attending campus and other social events helped Diane overcome her teenage shyness and make new friends. When she went to work in the school cafeteria during her first two years as a student, she talked to people and developed relationships with people all over campus.

Diane was inspired to pursue her field of study by her own family. Her father was a doctor, her brother was also in the medical field, and her mother had excellent math skills. Diane, who was supposed to go to business school, instead came to the University and majored in Health, Physical Education and Recreation, earning a minor in Math. She began working at Vestavia Hills Jr. High (later the High School) as a teacher and cheer sponsor. It was there that she met the love of her life, late husband Cooper Ray.

During a difficult period in her life, Diane remembered the friendships and support she received at Montevallo, and she returned as a graduate student, earning her Master’s degree in Physical Education in 1974. She continued to teach and coach cheer at Vestavia High School before retiring in 1993.

Upon retirement, Diane began attending more University events and recaptured the feeling of belonging to the family. The current financial situation of many students is one of the reasons Diane gives back to the University of Montevallo. She says, “I feel close to students’ needs because I spent my entire life in a school with students.” Diane makes unrestricted annual gifts so that the University can put the money to use where it is most needed. The University of Montevallo has recently announced the public phase of its first-ever comprehensive fundraising campaign, The Campaign for Montevallo: It’s About Family. A main priority of the multi-million dollar fundraising campaign is to build annual giving through unrestricted, budget-supporting gifts to provide for the critical needs of students, faculty, coaches and staff.

In addition to her generous giving, Diane has served as a member of Montevallo’s Alumni Board for three years. She was recommended by Vera Cox ’56 and Sandi Falkenhagen ’68. She is also a member of the 1896 Society, which means she has included the University of Montevallo in her estate. While Diane is an invaluable member of our family, several other organizations have welcomed her into their families as well. Diane serves on the Hoover Beautification Board, and the Jefferson County Board of Distinguished Young Women (formerly known as Junior Miss). She is an usher at her church as well as at the Alys Stephens Performing Arts Center, and she is a member of the Shakes Mountain Women’s Club.

Diane would tell fellow alums that are considering philanthropy, “Remember how you got where you are and think about that place where you received an education—not just in academia, but also in life—and made so many amazing relationships. Help current and future students to have the same wonderful experiences you had. Every dollar counts.”

For campaign information, contact Gary Johnson, Comprehensive Campaign Director at 205-665-6217 or visit The Campaign for Montevallo: It’s About Family webpage.