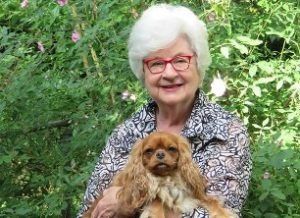 Family history can put a life in context. What a person cares about, how he or she spends time, pursues a career, or treats other people can be traced back through the generations of a family tree. This is true for Barbara Bonfield ’58. She is an author, activist, philanthropist and a person of deep faith and conviction. To understand her, you have to know the stories about those who came before her and how their influence shaped her impactful life.

Barbara was born in 1937 in Lincoln, AL to Samuel Goldstein and Margaret Embry Goldstein. Margaret’s family was the third generation of Embry’s to live on the land her great-grandfather, Elijah Embry, settled in the 19th century. Today, it’s known as Embry’s Bend. Barbara’s brother, Jimmy Goldstein, owns much of the original property and continues to cultivate a large portion of farmland.

Barbara’s great-grandfather, James Zachariah Embry, stood against slavery and freed his father’s slaves years before the Emancipation Proclamation abolished the practice for good. Many of the freed families stayed in Embry’s Bend, and as was a common custom, they took the Embry name as their own.

Barbara didn’t understand the concept of segregation until she was six years old, when she watched her childhood playmates, Tad, Dollbaby, and Boots, walking to their school – in cold and rain – from the comfort of her bus seat. Her mother, a schoolteacher, rode the bus with Barbara and asked the driver to pick the children up and take them to their school, which was another six miles away. The driver agreed until someone at the Superintendent’s office heard about the arrangement and ordered him to discontinue the practice.

Barbara’s mother, a 1926 Alabama College graduate, was a significant influence in her life. Margaret was born to James Alden and Lula Box Embry. Like his father and namesake James Zachariah, James Alden was also a progressive thinker. He was an attorney and the superintendent of education in a Baptist church. His wife, Lula, was the organist at a Methodist church. When Margaret met and fell in love with Samuel Goldstein, a gregarious Jewish man, James blessed the union. His influence allowed Margaret the freedom to choose to raise children in the Jewish faith, a faith that Barbara holds dear to this day.

Barbara also credits her sense of charity to her mother, who raised her in the last years of the Great Depression. The stock market crash of 1928 devastated the family, and they did not have much during those years. Still, Margaret encouraged Barbara to share, and she led by example. Barbara recalls her own doll collection, and that one year she gave a brand-new baby doll to a friend who had no dolls. She saw how that act of kindness and generosity made her friend so happy, and she knew she wanted to keep doing that for other people. Another vivid memory during those years was conversations with her mother and her 4-H club leader about helping to establish an African American church in Embry’s Bend.

Barbara followed in her mother’s footsteps and enrolled at Alabama College. During high school, she wrote scripts and was involved in school theater productions. Although she decided on a Social Work major, Barbara pursued an English minor, served on the Theater Council, wrote two Purple Side scripts for College Night, took fashion design and mechanical art classes, and she was the editor of the school newspaper – The Alabamian – her senior year. “I love the arts,” Barbara shares. “I support the College of Fine Arts and their vision to have a first-class program for training the next generation of actors, musicians, and artists.”

She also continued to be a vocal advocate for the rights of African Americans – questioning administrators about why African American students weren’t allowed to enroll. During her time here, she had a friend and classmate from Japan and another from the Middle East, and she didn’t understand why the school wasn’t more inclusive considering its history. For Barbara, the Montevallo story is a progressive story, a college for women during a time when it was not popular or socially acceptable to educate women. Barbara’s voice was part of a larger social movement happening during that time, the Civil Rights movement. The first African American students were enrolled at Alabama College in the fall of 1968 – a decade after Barbara graduated.

Barbara’s Montevallo story continued after her graduation. She met her husband, Robert, during the summer of 1958 thanks to Montevallo friends. She visited campus for College Night, and she became a class representative – a position she holds today. She keeps up with her classmates, and she keeps them updated on campus events through her newsletters. She also encourages them to give back to the University. “Everyone should be able to have the experience we had,” she said.

Barbara recently established a new scholarship at the University of Montevallo in memory of her parents. The Samuel and Margaret Embry Goldstein Endowed Scholarship honors the legacy they left in Barbara and her siblings. “My mother taught me about charity and faith. My father showed me how to be open to strangers. I have this unique blend of Christian and Jewish values and traditions that have influenced my life because of them,” she said of her parents.

Their influence led Barbara to a career as an advocate for civil rights, children, and senior citizens. When her children were teenagers, she went back to school and got her master’s degree in social planning and political advocacy and went to work for Jefferson County under Councilman Ben Erdreich. Her accomplishments are many and varied and include helping to establish Medicaid Home Care and the local Meals on Wheels program.

Barbara has built a legacy of helping Alabama residents of all ages and walks of life receive access to education, social services, and health care. Her impact will extend through her estate to generations of Montevallo students seeking an affordable, public, liberal arts education. In addition to her gifts to fine arts and scholarships, Barbara is a member of the 1896 Society, a group of forward-thinking donors who have left gifts to the University in their estate plans. She shares, “I plan on being around for awhile, and the longer I’m here, the more that investment is going to grow and the more students it will help.”

To hear Barbara share more of her story, watch the campaign video. For information about The Campaign for Montevallo: It’s About Family visit the campaign website or call Gary Johnson, Comprehensive Campaign Director, at (205) 665-6217.