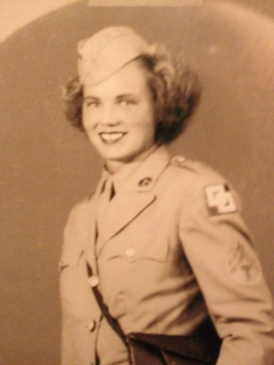 When a scholarship is established to honor someone’s memory, the story of that person is important for students to know because that is who made it possible for him or her to obtain the aid needed to pave the way for the future. The Anna Papanek Memorial Scholarship is a perfect example of such a fund. Anna’s remarkable story will inspire the students who receive this scholarship to achieve all of their goals.

Anna Papanek was born in Czechoslovakia in the 1920s. When she was just 13 years old, her mother passed away, and the Nazis began to take over parts of Europe. In order to ensure her safety, her father sent her to the United States to live with relatives in the New York area.  She worked as a domestic servant during the day and attended school at night, learning English and earning her United States citizenship.

After the United States entered the war, Anna joined the U. S. Women’s Army Corp, became a nurse, and eventually was stationed in Germany, where she met an Army medic from Mississippi who would become her husband. Before the end of the war, she was smuggled into Czechoslovakia to visit her family for one night. She successfully made it out before morning without getting caught. It wasn’t long before the Soviet Union took control of Czechoslovakia, making it a Communist ruled country, and she wouldn’t see her family again for almost 30 years.

Anna moved to Mississippi after the war where her husband started a business and they started their family together. Anna was passionate in her patriotism to the United States, and she regularly flew the American flag outside their home. Anna was very grateful for the freedom she had in the United States, and she wanted all Americans to understand just how valuable that freedom is. For this reason, she traveled to local schools to tell students her life story, and why they should appreciate their freedom in this country and never take it for granted. She was very active in her community, joining clubs and helping with fundraising campaigns. She was very proud of her military service and U.S. citizenship.

When her family or business would go through difficult times, Anna was the one who kept them together. She was always upbeat, positive, and courageous. The Anna Papanek Memorial Scholarship is for students facing a difficult time in their education. These students are juniors and seniors who do not have as many financial aid opportunities as incoming freshmen. If Anna could speak to these students at the University of Montevallo, she would have nothing but encouraging words. She would tell them to appreciate their freedom, take advantage of every opportunity they are given and complete their education.

The University recently announced the public phase of its first-ever comprehensive fundraising campaign, The Campaign for the University of Montevallo: It’s About Family. A main priority of the multi-million dollar campaign is to develop scholarships and the student experience. Inspiring people such as Anna have their memory preserved in scholarships at the University of Montevallo. It is not just her name that is added to the list, but her story as well. Each and every scholarship has a story; the stories and the assistance provided by these funds help students accomplish their educational goals.

For campaign information, contact Gary Johnson, Comprehensive Campaign Director at 205-665-6217 or visit The Campaign for Montevallo: It’s About Family webpage.