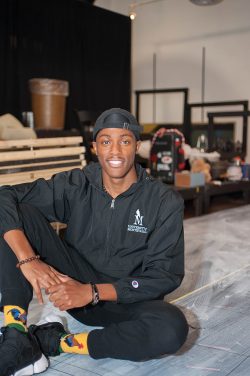 For most of July, UM musical theatre major Terrance Boykin wasn’t himself. In fact, he was often five different people: a guard, a beggar, the Duke of Buckingham, another guard named Debris and a man named Rochefort, a henchman of the evil Cardinal Richelieu.

To clarify, Boykin performed as these characters in the Birmingham Children’s Theatre production of the classic swashbuckling tale, “The Three Musketeers.” The show ran from July 12-29, with performances each week from Thursday to Sunday.

It was the longest run of performances in Boykin’s career thus far, but also his first time working as a professional actor earning a paycheck for his craft.

Boykin began performing at age 10 in M.A.D. Skillz, a Birmingham contemporary dance company. “I’ve been dancing and moving since I can remember,” he said.

In high school, he auditioned and was accepted in the Jefferson County Academy of Theater and Dance at Shades Valley High School in Irondale, Alabama.

There, Boykin was introduced to theater, his “second love” only to dance. By his senior year, Boykin had performed in five shows and co-directed a production of “Mojo Man,” a one-act play by Walter Wykes. He was, by all accounts, a triple threat: a performer capable of acting, dancing and singing if the production called for it.

He needed a college that could further hone his talents, which he found at Montevallo after witnessing the spirit of a College Night performance and the quality of the UM Theatre Department’s production of “Cabaret.”

So far, Boykin’s greatest lessons learned at UM have occurred both outside and inside the classroom. “I’ve learned that the Theatre Department is about starting from where you are and helping build your skill set to where you want it be.”

Beyond learning to be a more nuanced performer, Boykin said he’s also gained valuable skills on how to be a professional and what a real audition process entails.

Outside of the classroom, Boykin said he’s been forced to put into practice the delicate balance between time and commitments. In the spring of 2017, Boykin learned, as many freshmen do, the sleepless nights of dedication required to play on either Gold or Purple Side during College Night.

Add memberships in Kappa Alpha Psi fraternity, the Theatre Student Organization, the Minority Student Union and the African American Studies Club and responsibilities as a Montevallo Master, and you have a fully packed schedule.

Luckily, lessons passed on from his mother and stepfather prepared him to be independent and to prioritize his needs. “If I can find a way to make it happen, it’ll happen,” he said.

This deep reverence for the life lessons passed down from his parents influences another part of Boykin’s overall career goals: his own mentoring program for young, college-age men, regardless of major.

His time as a former orientation leader introduced him to several incoming freshmen that perhaps didn’t have the positive reinforcement he grew up with. For Boykin, it makes him reflect on how his parents’ support offered him the means to get an education and get paid to perform.

“I just really appreciate how much they’ve sacrificed when they didn’t have to. But they did it because it’s what I love,” said Boykin.