In celebration of the state of Alabama’s 200th anniversary, UM Professor of Music Joseph Landers has composed an original opera based on the historical book, “Let Us Now Praise Famous Men” by James Agee. 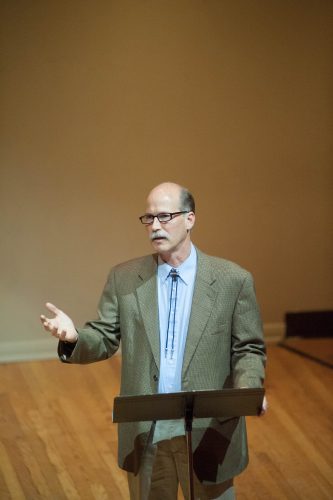 Joseph Landers gives an artist talk before selections of his opera were performed in UM’s LeBaron Recital Hall during the University’s Forte Festival of Creativity in April.

In 1936, New York journalist James Agee traveled to Hale County, Alabama to live with three destitute sharecropping families and profile their struggles. “Let Us Now Praise Famous Men” is his famed recollection of the time he spent in Hale County.

In Landers’ opera, Agee’s book serves as a backdrop to a dramatic narrative centered on the fictionalized accounts of a single sharecropping family. The intimate relationships between family and community members is the major theme of the work.

“The opera is an attempt to recapture his story-or rather the story of Alabama and our people as seen through Agee’s eyes,” said Landers, who spent the last four years composing the unique piece.

“The State Council on the Arts has been pleased and proud to provide grant support during the development of this effort as part of a number of projects related to the bicentennial,” said Al Head, executive director of the Alabama State Council on the Arts. “I have personally been excited to see this story evolve in an operatic format under the skillful hands of one of Alabama’s best homegrown composers.”

The production’s cast will be made up of University of Alabama students, alumni and faculty members while the orchestra will feature players from across the Southeast.

“Joseph is a distinguished graduate of the School of Music and his profound work will be the perfect way to observe the bicentennial of both the city of Tuscaloosa and the state of Alabama,” said Paul Houghtaling, director of UA’s Opera Theatre. “This isn’t just a Roll Tide endeavor; this will be a celebration of Alabama art and culture and all that’s unique and special about our state.”

The opera is set to premiere at the UA’s Moody Concert Hall sometime in October 2019. It will later be rebroadcast on Alabama Public Television.