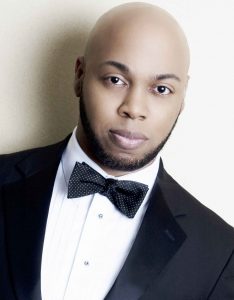 Tenor Roderick George made his New York Lincoln Center debut as a soloist in Handel’s Messiah. A noted concert artist, his repertoire spans from Bach’s Magnificat and Mozart’s Requiem, through Beethoven’s Ninth Symphony and Rossini’s Stabat Mater, to Orff’s Carmina Burana and contemporary works by composers such as Adolphus Hailstork, including recent performances of Hailstork’s I Will Lift Up Mine Eyes with VocalEssence in Minneapolis, Minnesota, and with the Nashville Symphony. He has also been heard throughout the country in performances of R. Nathaniel Dett’s The Chariot Jubilee, a work in which he is featured on the latest project of the Oakwood University Aeolians. Internationally, he has made appearances throughout Europe, the United Kingdom, South America, Canada, and Russia. On the operatic stages, he has performed a diversity of leading lyric tenor roles in operas such as L’elisir d’amore, Don Giovanni, Die Zauberflöte, Madama Butterfly, La Bohème, La Traviata, Romeo et Juliette, Lakmé, Porgy and Bess, The Merry Widow, and Lost in the Stars.

Dr. George is a champion of American art song, specializing in the songs of H.T. Burleigh and settings of texts by Paul Laurence Dunbar and Langston Hughes. He sang the world premiere of Adolphus Hailstork’s “Four Romantic Love Songs” on poems of Dunbar at the 2012 African American Art Song Alliance Conference in Irvine, California. His professional choral affiliations have included multiple tours throughout the United States and abroad with the American Spiritual Ensemble and more recently with the Jason Max Ferdinand Singers. Dr. George heads the vocal program at the University of Montevallo where he was named a recipient of the College of Fine Arts Distinguished Teacher Award. He holds graduate degrees in voice, opera and musical theater performance from Florida State University and Southern Illinois University at Carbondale, with advanced studies in Austria at the American Institute of Musical Studies. He previously taught on faculty at Stillman College in Tuscaloosa.

Additional information is available at www.roderickgeorge.com.