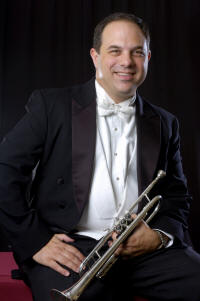 As a trumpet player, Dr. Ardovino is an active recitalist as well as a tenured member of the Tuscaloosa Symphony, and performs with the Alabama Symphony. Yearly, Dr. Ardovino conducts various district and county honor bands around the Southeast and was asked to conduct the Blue Band at Alabama All-State in 2009. He is sought after as an adjudicator for many band and solo competitions as well. He also serves as coordinator and conductor for the annual UM Honor Band Festival and All-State trumpet clinic. Dr. Ardovino has twice received the College of Fine Arts Distinguished Teacher Award, in 2000 and 2010. Dr. Ardovino is a member of the International Trumpet Guild, Alabama Bandmasters Association, Alabama Music Educators Association, The National Association for Music Education, National Association of Wind and Percussion Instructors, and College Band Directors National Association. He is a Bach Artist/Clinician for the Conn-Selmer Corporation.