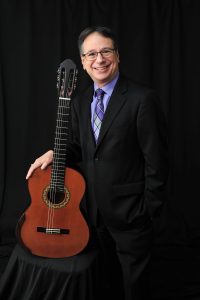 ALAN GOLDSPIEL has performed world premieres at New York’s Carnegie and CAMI Halls and has been featured on NPR radio stations from coast to coast. He is the recipient of the Alabama State Council on the Arts 2016-2017 Artist Fellowship Award for artistic excellence as well as professional commitment and maturity – awarded to outstanding individual artists from Alabama who create important works of art and make valuable contributions to the entire state. His music has been performed at national and international events including the conferences of the North American Saxophone Alliance, National Association of Composers, and International Clarinet Association. Dr. Goldspiel received the 2014 Alabama Music Teachers Association Composition Commission and he was a 2013 recipient of the Escape to Create Residency in Seaside, Florida.

He is the only guitarist to be honored with the Marshall Dodge Award of the Performing Artists Associates of New England and has been a soloist with the Chamber Orchestra Kremlin, Monroe Symphony Orchestra, Vermont Philharmonic, Sinfonie-by-the-Sea, and served as an Artist-in-Residence for North Carolina’s prestigious Visiting Artists Program, presenting over eighty concerts throughout that state. As the Music Director of the Magic Shtetl Klezmer Band, he has performed and arranged many pieces from the classic Klezmer repertoire. His composition project, a Klezmer Shabbat Service, keeps that tradition current.

He has received numerous awards for excellence in teaching, research, and service including the Louisiana State Arts Council Artist Fellowship Award for artistic excellence and the University Senate Chair Award from Louisiana Tech University. He has taught at the International Guitar Festival held at the The Hartt School, where he remains the only guitarist to be designated University Scholar for his research on the music of Villa-lobos. He is Professor of Music and Chair of the Department of Music at the University of Montevallo.

More information, including news, events, and catalog can be discovered at the website www.alangoldspiel.com.

“Goldspiel’s compositions exhibit a variety in thematic melodies that are well suited for musicians and audiences. His work is imaginative and explores new musical ideas.”