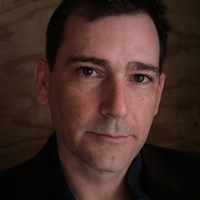 Marcus Lane currently teaches movement, stage combat, acting, theatre history and directing at the University of Montevallo. He received his MFA in Acting Pedagogy from the University of Alabama and his BA in Theatre from Louisiana Tech University.

Over the years, Marcus has worked as an actor, fight choreographer, movement coach, and director. Recent directing credits include GODSPELL, DNA, GOD OF CARNAGE and THE ROCKY HORROR SHOW here at UM. He recently directed HEDWIG AND THE ANGRY INCH in Birmingham for The Dane Theatre. Favorite acting credits include Riff Raff in THE ROCKY HORROR SHOW, Mad Hatter in ALICE IN WONDERLAND, and Daniel Boone in BLUE JACKET.

Marcus was seen in City Equity’s production of SPRING AWAKENING as Professor Fitztongue and the Reverend Bleekhead. He also served as Fight Director for JULIUS CAESAR, MUCH ADO ABOUT NOTHING, and MOONLIGHT AND MAGNOLIAS at the Alabama Shakespeare Festival. You can also read his article on directing/staging using the Ipad app, STAGE WRITE, in the spring 2014 issue of Southern Theatre Magazine.

He is a member of Actors Equity Association, Society of American Fight Directors and the Southeastern Theatre Conference. He is also the Faculty Advisor for the UM Bass Fishing Team, currently ranked #8 in the nation. In his free time, Marcus enjoys fishing, playing cards, SEC football, cooking and spending as much time as possible with his lovely wife, Jen, and their finest collaboration yet, Dean.