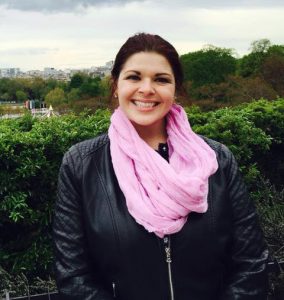 She worked for over a decade as an Emmy and Murrow award winning broadcast journalist. She was an executive producer, field producer, news producer, and internship coordinator at WVTM Alabama’s 13 News and WIAT CBS 42 in Birmingham, as well as WAKA CBS 8 Alabama News Network in Montgomery. Danielle then went into nonprofit communication, PR, and marketing, working for the American Red Cross, American Heart Association, and UAB Medicine.

During her master’s program at UAB, she decided to work towards her dream of being in the classroom as a faculty member and began her doctorate at the University of Alabama’s College of Communication and Information Sciences in 2019. Her research specializes in media sociology, specifically the normative behavior of journalists during crisis coverage and newsroom diversity issues. Her dissertation examines the nonverbal neutrality of broadcast journalists during school shooting coverage, from Columbine to Santa Fe.

Deavours teaches a wide range of courses, including journalism, media writing, emerging media, mass communication, PR, and social media. She has been recognized for her teaching skills through the Association of Education in Journalism and Mass Communication’s and Broadcast Education Association’s GIFT programs.

Her research has been published in peer reviewed journals, including Mass Communication & Society, Electronic News, Popular Culture Studies, and Communication Booknotes Quarterly. She also contributed a chapter on misinformation distributed on social media during crises to Routledge’s upcoming book American Democracy: Influence, Activism, and Misinformation in the Social Era.