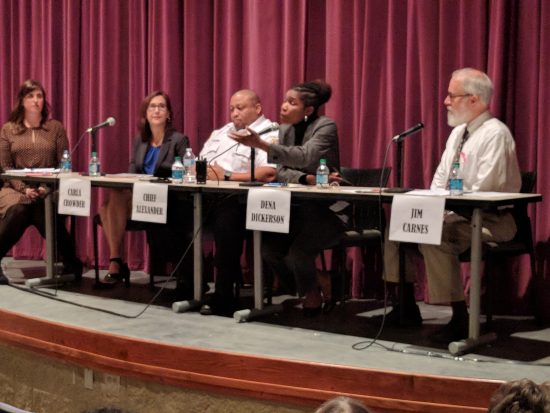 Peace and Justice Studies at the University of Montevallo examines causes and consequences of economic disparity, institutionalized inequality, and strategies of peace building and conflict resolution.

UM’s location at the heart of the civil rights triangle in rural Alabama and our institutional history of working toward gender equity and inclusivity provides unique opportunities to pursue the work of a peace and justice studies minor. Our students explore community issues within global contexts to critically analyze race, gender, and class relations.

We offer students spaces for experiential education and community partnerships as well as scholarly engagement to learn the history of and techniques for conflict resolution, mediation, social change, and critical thinking. Minors may enhance their major field of study through our social justice framework and go on to become negotiators, community mediators, government officials, educators, businesspeople, organizers, and professionals in organizations focused on human rights, dispute resolution, environmental protection, international law, and human and economic development.

The Junior Alumni Board Peace and Justice Scholarship purpose is to reward a student who has declared a Peace and Justice minor and shows exemplary participation and service toward social justice movements. Review the scholarship application link below for criteria and guidelines.

Topics vary. Course may be repeated for credit as often as the topic changes.

Students must take four elective courses in at least three different disciplines. No more than two courses may be taken in any one discipline (includes cross-listings).

This course will examine artworks produced during the 17th and 18th centuries in a global context. We will study paintings, sculptures, illustrations, prints, buildings, and landscape design from Europe and the Mediterranean, Africa, Central and South America, and East Asia. The course will emphasize particularly the roles that artistic exchange, trade, and exploration played in shaping art of this period. The course also will introduce students to key critical debates relative to these artworks with special focus upon women and gender, colonialism, otherness, and art’s relationship to the natural environment.

The course focuses on both Europe and the “global Baroque,” including interactions between European courts and colonizers and extra-European cultures. Students are introduced to a variety of critical theories to analyze race, gender, and class relations in visual art of the period, as well as to the roles of institutions such as the Catholic church, the Spanish crown, the Dutch East India Company, and others, in creating institutionalized inequalities. Prerequisite: ART 219

ENG 232-002 Global Literature, Unquiet: Voices of Conscience and Protest Since 1945

ENG 232-003 Global Literature, Unquiet: Voices of Conscience and Protest Since 1945

“What goes around comes around” may be a pop karma standard, but in cases of prejudice, discrimination, injustice, and wars of many kinds, the history of humanity often seems to move in a dark and foolish circle. Small lies turn into big ones. Bad ideas turn into beliefs. And power exercised on both ends of the political spectrum creates enormous harm. But then, just as often, voices of protest arise that attempt to restore dignity and try to remind us of our shared humanity. From Eastern Europe to the Caribbean to the Middle East and to the heart of the USA, we will explore authors and singers whose voices seek peace and justice and offer inspiration for others who do the same. They may be writing directly for the rights of women, Jews, African Americans, LGBTQ+ people, or those living under totalitarian regimes (and sometimes nearly all at once), but their lessons are universally important for those who think critically, express themselves clearly, and dream hopefully. Our texts will include those listed below, and our assignments will be short responses to each text, an engaged scholarly research paper, and a space for students to offer their own examples of artists such as these. James Baldwin Going to Meet the Man, Yehuda Amichai The Selected Poetry, Allen Ginsberg Howl and Other Poems, Vaclav Havel Open Letters, Jamaica Kincaid At the Bottom of the River, Lucille Clifton How to Carry Water: Selected Poems, Terrance Hayes American Sonnets for My Once and Future Assassin, The music of Nina Simone, Bob Dylan, Bob Marley and PJ Harvey.

It is hard to overstate the extent to which the idea of “equality” was viewed as a new and transformative concept in the early American republic. After all, at the time of the American Revolution, no modern society had enshrined equality as its core value. In response, scores of writers and poets rushed to speculate and debate what it would mean to live in a nation based on the concept of equality. In approaching this body of writings, we will focus on how authors attempted to define and understand equality as an imagined social reality in its own right.

Postcolonial literature arises from colonialism and the dissolution of European empires. This literature critiques the cultural narratives that allowed for colonial domination and illustrates the postcolonial condition. In this course we will read post-1945 literature of Africa, the Caribbean, and India and discuss how each of the selected works challenges the Western cultural imagination and expands the literary canon to include postcolonial literature. Taking into account postcolonial criticism from theorists including Edward Said and Gayatri Spivak, we will consider how literature by such writers as Jean Rhys, Salman Rushdie, and Tsitsi Dangarembga rethinks narrative form. By analyzing the way that the selected texts play with voice, perspective, and imagery, among other narrative elements, we will explore the techniques through which postcolonial literature reconceptualizes storytelling and challenges historical narratives. We will also discuss how this literature contributes to political debates about the state of the postcolony in contemporary socioecomic and cultural contexts. From our analysis of the project of writing back, to our study of the postcolonial bildungsroman, to our discussions about the impact of globalization on the postcolony, we will consider how redefining the relationship between aesthetics and politics might impact the function of all literature.

This course will examine the Nazi genocide of Europe’s Jewish population during the Second World War.  While commonly known as “The Holocaust,” scholars also use the term “Shoah” (calamity) as well.  This course will ground this tragedy within the larger context of Jewish history in Europe, the rise of a united Germany, the origins of anti-Semitism, and the role of the Nazi State.  We shall also examine the European-wide reaction to this event with case studies of perpetrators and bystanders.  Finally, we will discuss the changing views of the Holocaust over the last seventy years.

This class will discuss explore the testimonial genre that has influenced Latin American literature in recent decades. Testimonial literature emerged as a genre in the 1970s and 1980s when researchers and activists were seeking means of facilitating “subaltern peoples” self-representation. By recording the testimony of people who were often illiterate and almost invisible in Latin American power centers, transcribing, and editing that testimony and presenting it to the public it seemed possible to provide a “voice for the voiceless.”

This interdisciplinary course will examine racial and income inequalities that result from the development and implementation of environmental policies. It will investigate the root causes of these disparities, their impact on physical, mental, and emotional health, and mechanisms for meaningful change.

Drug and alcohol use and abuse are deeply interwoven into the psychosocial and economic fabric of American society.  This course will introduce the student to major theories of addiction as well as the physiological and psychological results of chemical dependency.  State and federal policies regarding control of drugs, including alcohol and tobacco, will be reviewed.

Sociological study of the extent and nature of drug and alcohol use. An emphasis will be placed on theories of substance use, effects of substance use, and the social control of substance use. A critical examination of the effectiveness of the war against drugs will be explored along with its alternatives. Prerequisite: SOC 101 (or 102).

The overarching goal of this course is for students to learn about combining environmental and social issues in a way that is positive both for the environment and for people in need.  Students will have the opportunity to plant and harvest summer crops at the UM Organic Community Garden, create computerized community asset maps, and visit a food bank which functions as an alternative food source for those in need.  Students will understand foundational poverty and hunger issues, proper basic nutrition, and poverty-associated diseases and problems, and will learn about local and national mechanisms to combat hunger.  Students will develop an understanding of some of the difficulties associated with hunger and poverty through mock-applying for food stamps, mock-shopping for food using only food stamps, and by using only food provided by Shelby Emergency Assistance (SEA, a social services agency and food pantry in Shelby County) to plan meals for a week.  Students will use Google mapping to diagram food availability in a community in order to understand the concept and impact of food deserts (geographical areas in developed countries that lack access to food).  Students will expand their understanding of care of the Earth by practicing organic gardening and learning about soil nutrients and soil erosion.  Central to this course is its service-learning component, in which students will assist in packing food for families at SEA while taking proper nutrition into consideration and will donate all foods harvested from the Garden to SEA.  Thus, in this course, students will provide their time and energy to reduce hunger locally.

An examination of the rising use of incarceration and its effects on society. Explanations of social forces contributing to these trends are examined and possible remedies are explored. The utility of mass incarceration as a means of ameliorating social problems is explored and critically examined. Prerequisite: SOC 101 (or 102).