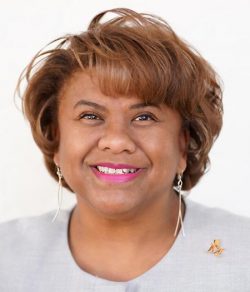 Cynthia Todd is a native of Calera, Alabama and resides in Pelham.

Todd, a native of Calera who resides in Pelham, received her bachelor’s degree in business administration and management from UM in 1988. Before her trustee appointment, she served in several roles with the University of Montevallo National Alumni Association from 2006 to 2022.

In 2020, Todd received the Birmingham Business Journal’s Top Birmingham Women award and in 2021 she served as a BBJ Bizwomen Mentor.

Todd has had a lengthy and distinguished career in corporate America. After 13 years of service, Todd retired as the operations manager of Blue Cross and Blue Shield of Alabama. She also worked as a manager at Protective Life in Birmingham for more than 20 years.

During her time as a student at UM, Todd served as president of the Alpha Kappa Psi professional business fraternity, was an active member of the Inspirational Voices of Christ, the African American Society and Omicron Delta Kappa National Honor Society. She received several honors, including Senior Elite, Who’s Who Among Students in American Universities and Colleges, Golson Scholars Seminar, The Wall Street Journal Annual Achievement Award, the John A. House Award and The United States Achievement Academy National Collegiate Award.

Todd has also served as Vice President  of Upsilon Eta Omega Chapter of Alpha Kappa Alpha Sorority, Incorporated and as a Loaned Executive for the United Way of Central Alabama where she received the Crawford T. Johnson Loaned Executive of the Year Award.

In addition to her degree at Montevallo, Todd holds a master’s degree in non-profit, public and organizational management from Birmingham-Southern College.